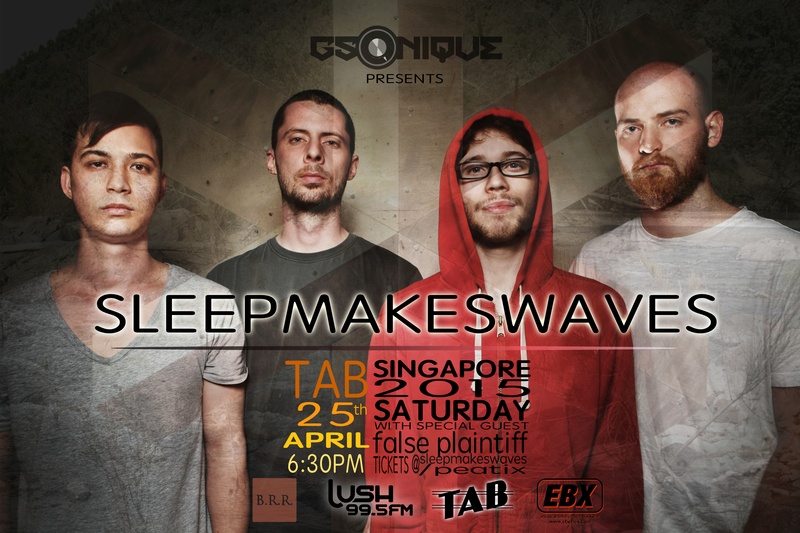 ->>> sleepmakeswaves are an instrumental rock band from Sydney, Australia.

Drawing influences mainly from but not limited to post-rock, the young quartet mix driving metallic bombast with textured electronics to create a sonic space where delicate melodies and thunderous climaxes peacefully co-exist.

Since their formation in late 2006, sleepmakeswaves have rapidly established themselves as a promising and unique voice in their field. In late 2011, the band released their debut studio album "...and so we destroyed everything", kicking off an amazing run. Over the past three years, their busy schedule has included 8 Australia tours, 3 European tours, touring the USA and playing SXSW, sharing the stage with luminaries such as Mono, Boris, Pelican, 65daysofstatic and Russian Circles. In 2014, the band toured with Karnivool and Dead Letter Circus, headlined their biggest Australian tour to date and have their brilliant new album "Love of Cartography" nominated for an ARIA Award, a J Award and AIR Award, and singles "Something Like Avalanches" and "Great Northern" have been a staple on Triple J radio.

Stopping over in Singapore in the middle of their 4th European tour, and their first time in Asia, their show at Tab is certainly going to be a celebration of everything they've accomplished so far and a terrific affirmation of why they are one of the most lauded modern instrumental bands around. They will be supported by up-and-coming punk/emo/spoken word quintet False Plaintiff, one of our brightest new Singapore acts.

"Love of Cartography" is out now through Bird's Robe Records and available through https://sleepmakeswaves.bandcamp.com/

Tickets are $50 pre-sale via Peatix and $60 at the door on event day. http://sleepmakeswaves.peatix.com/

Brought to you by Gsonique and supported by Lush 99.5fm, Tab and Ebenex.

Oops, you forgot something.

The words you entered did not match the given text. Please try again.

Reply Jamoshok
11:07 AM on June 6, 2021
You revealed that wonderfully.
pain meds online without doctor prescription
https://tremals.webs.com/apps/guestbook/

Reply Jamoshok
3:25 AM on June 8, 2021
Valuable info. Appreciate it.
https://dissertationwritingtops.com/
essay writings
https://discountedessays.com/
how to write a good dbq essay
https://theessayswriters.com/
all college essays
https://theessayswriters.com/
what is a college essay
https://muralsbyrenee.webs.com/apps/guestbook/

Reply Jamoshok
7:04 AM on June 11, 2021
Thanks. A good amount of write ups!
https://englishessayhelp.com/
reflection essay on writing
https://topessayssites.com/
how write an essay
https://essaypromaster.com/
columbia college chicago essay
https://paperwritingservicestops.com/
how to write a thesis statement for a essay
https://tillcarr.webs.com/apps/guestbook/

Reply Jamoshok
9:23 AM on June 12, 2021
Amazing all kinds of awesome advice.
https://essayssolution.com/
i need to write an essay
https://topswritingservices.com/
how to write literature essay
https://quality-essays.com/
cheap essays for sale
https://service-essay.com/
can t write essay
https://ashleycroft.webs.com/apps/guestbook/

Start a Free Blog at Webs.com